HomeWhat are the Various Types of Welding Gas Used For? 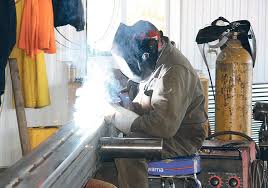 What are the Various Types of Welding Gas Used For?

Traditional stick welders didn’t know much about gases, but the rise of MIG and TIG welding machines in the last 70–80 years has made welding gas a common thing in most shops.

Why, though, are there so many kinds of welding gases? And what do you do with them?

As we talk about the most common gases and mixtures used in welding, it’s interesting to see how far we’ve come in the short time since they were first used. The change is huge, and it’s exciting to think about what’s in store for new gases or new ways to use these gases.

What’s the point of gas when you’re welding?

There are many different ways to use welding gas. These include keeping air, dust, and other gases from getting into the arc, keeping the welds clean on the seam side opposite the arc (called “purging”), and heating the metal. Blanketing gases can also be used to keep metal safe after welding.

Gases that don’t change or react

Gases can be either “inert” or “reactive.” When they come into contact with other things or temperatures, inert gases don’t change or cause change. The opposite is true for reactive gases. In different situations, they react in ways that cause the other substances and/or themselves to change state.

Inert gases are helpful because they let welds happen naturally without anything happening that would weaken or change the weld. Reactive gases change the way the weld is done in a good way, which makes the material stick together better.

When air gets into the arc while you’re welding, air bubbles form in the molten metal. This makes the weld weak and ugly. You can’t MIG or TIG weld without a shielding gas, unless you’re using flux-cored or flux-coated filler material. This keeps impurities out in the same way that a shielding gas does, but in a different way.

Most shielding gases are inert, which makes them perfect for protecting a welding process because they don’t change when exposed to the high temperatures and pressures of welding. Depending on the gas used, they also help the weld in different ways, such as making it deeper, more fluid when molten, and smoother on the bead.

Purging gases are used to cover the bottom of the thing you’re welding in the same way that shielding gases do, but this is done outside of the weld itself.

While you weld the top of a joint, the bottom is sealed off and a flow of gas is used to clean it. It is often used with things made of stainless steel, and it can be the same gas or a different gas than what is used on top of the joint.

For some kinds of welding, like gas welding and brazing, the metal or the filler rods need to be heated with gas. This takes the place of the arc.

Before some kinds of welding, the metal needs to be heated up first. This gas is used to do that. The gas is just a fuel mixed with air or oxygen that is lit by a flame to heat or melt the metal.

Blanketing is the process of filling tanks and small spaces with a gas after they are finished. This keeps air and other impurities from damaging or staining the finished product.

It’s sometimes used to fill the whole project when it’s done. Sometimes, the gas is added to an air-filled tank to make a mixture that keeps the tank clean from other gases or reactions.

What kinds of gases can you find in a welder’s shop?

Argon is an inert gas, which means it shouldn’t change when it comes in contact with other things. People thought that until they found out that it changes shape when it gets hot. It is the third most common gas on Earth and is a great way to keep things from reacting, like in a light bulb to keep the air from eating the glowing filament.

As a shielding gas, argon keeps air away from a welding arc. It is used both in the first step of welding and to clean the back of the joint. It is the most common shielding gas and is often mixed with other shielding gases for MIG welding.

Carbon dioxide is what comes out of our lungs when we breathe, and it also comes from living things. It is a very common gas on Earth because of this. Natural gas is used to get industrial C02, which is then compressed in a pressure tank and used in shops and other industrial sites.

What is the point of the welding?
C02 is used to keep things safe. It costs less to buy, but the welds it makes aren’t as good as those made with argon, and it makes more spatter during the welding process. Because of this, it is usually mixed with other things rather than used by itself.

Its pure form is used for flux core welding, some MIG welding on carbon steel, and plasma shielding.

This is what we breathe, but it’s in a more compact form. 78% of it is nitrogen, 21% is oxygen, and 1% is something else. When air is compressed, it is squished into a smaller space than it would normally fit into.

It is pushed into the tank, which makes a lot of pressure. When it comes out, it happens quickly in the application you’re using it for.

Air isn’t used in welding because it messes up the weld, but it is used in many other ways in a welding shop. A lot of shops use compressed air to clean the workshop of dust, swarf, and other dry things. Air nozzles with hoses attached to compressors shoot out air to blow away dirt.

It is also mixed with fuel to make flames that heat up metal before welding. Some materials, like high carbon steel, need an even transfer of heat or a slower change from cold to hot when they are welded. This is why you sometimes need to pre-heat.

Almost all life needs this important gas to live. It doesn’t have a smell, colour, or taste, and many people think it’s a more peaceful and friendly gas than most. In fact, it is one of the gases with the most reactions in the world. It is found in all living things and mixes with all other gases except for the “inert” gases.

Mixing it with shielding gases smooths the molten pool and speeds up welding. When combined with acetylene, it creates the only flame hot enough to forge steel.

Oxygen works as a protection when welding some metals using gas and oxygen.

Nitrogen is important because it is the most common gas in our atmosphere. It covers about 80% of the earth’s surface and is a part of every living thing. You can use it to preserve and protect food, motors, tanks, and other things from too much oxygen or other gases.

What is the point of the welding?
You can use Nitrogen alone as a shielding gas for laser welding and plasma cutting. It’s sometimes in blend with other shielding gases, although carbon steels don’t like it. Nitrogen-rich metals can deepen penetration and keep the arc constant when employed as a shield.

After welding in tanks and other enclosed locations, you can use nitrogen as a blanketing gas to keep the material safe until you can use it .