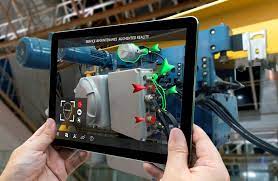 Augmented reality has become one of the most talked-about topics in posts and articles. The talk is about new technologies in the past few years. We will see how Augmented Reality works.

To get an idea of how important it is, all we have to do is look at the investment numbers for the next few years. Experts say that by 2018, they will be worth about $2.5 million.

But do we know for sure what Augmented Reality is? Do we understand how it works?

In this post, we talk about three ways to understand a technology that is becoming more and more important to us and that we usually use.

The virtual world is better than the real world.

Augmented reality involves putting virtual information (text or images) on top of a person, object, or space in the real world using a camera device or a vision module (usually glasses) and a combination of computerised processes. This adds to and improves the visual experience. A hologram is the thing that best fits this definition of Augmented Reality.

Augmented reality is based on.

To make Augmented Reality work, we need to add intelligence to a camera, like the one on our phones, so that it can recognize not only faces but also cards, books, and other things.

We can do it with the help of computer technology:

– Stores of information that work like a person’s memory. These databases are like a bank of image parts that have details about the object we’re going to point at with our device and how these parts relate to each other.

– A detection system that uses vision and is based on an algorithm.

Each developer has his or her own algorithm, which will be different depending on the technology used: with or without a marker (markerless).

You can use Bar codes and markers in the same way. In them, each bar stands for the number written below it. We make Markers with the same idea in mind. Each marker works like a bar code, encoding information, in this case the parts of the image we’ve already talked about.

Seabery’s Augmented Reality technologies go one step further because they are interactive. This means that users can interact with augmented real objects and make a 3D simulation.

So now you get to know how augmented reality works.